New figures show fewer immigrants in the UK than previously thought, but it’s doubtful this will affect some media which warp public understanding of reality, writes freelance journalist Abi Wilkinson:

It turns out that net migration – the number of people coming in and out of the UK – may be much lower than previously thought. We now know that the Home Office has ordered an official review of the effect of international students on the British labour market. Apparently, it was formerly assumed that tens of thousands remained in the country illegally after graduating. However, the border checks introduced by the government last year show that 97% leave once their studies are completed. International students are one of the largest groups of immigrants in the UK, but this information also casts doubt on other UK immigration statistics.

So now we know, what difference does it make? Not that many of us seem to pay attention to the official figures anyway. Even before this information came to light, opinion polls consistently found that the general public massively overestimates the percentage of foreign nationals living in the UK. One such survey, conducted by Ipsos Mori in 2016, found that voters believed, on average, that 15% of the population were non-UK EU nationals. (Those who intended to vote leave estimated an average of 20% and remain voters guessed 10%.) Official figures at the time put the number closer to 5%. 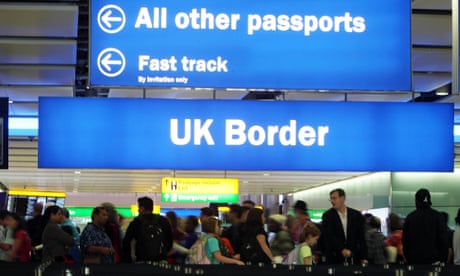 Now it seems that even those figures are overstating the truth, it’s becoming increasingly clear that the national panic over immigration is more akin to a tabloid-driven, collective fever dream than anything grounded in concrete reality. Research has found that attitudes are most negative among people in areas with very low immigration. British nationals in places with a relatively large migrant population are far less likely to see immigration as a problem. Younger people are also far more likely to view immigration positively. Perhaps because when you live, work or study alongside people from other countries, you realise that’s all they are: people. The less contact you have, the more probable it is you’ll believe in the bogymen presented by the rightwing press.

It’s interesting to look at data tracking the percentage of the population who view immigration as one of the “most important issues facing Britain today”. The figure peaked at 56% around the time the Brexit referendum was announced. Since we voted to leave the EU it has dropped fairly steeply, with roughly a quarter of the population still citing it as an important issue. Though (now questionable) government figures do suggest net migration fell in the period since the referendum vote, the reduction isn’t large enough that ordinary people are likely to have noticed a difference.

Nor have any of the problems falsely blamed on immigration, such as housing undersupply and overstretched public services, significantly reduced. If anything, things have got even worse. Homelessness continues to rise. The NHS is facing an unprecedented staffing shortage as a direct result of the Brexit vote – as European workers have been deterred from applying to work in the UK.

What has changed is the way the issue is covered by the media. Newspapers that campaigned for Brexit inform their readers they’ve succeeded in “taking back control”. Publications which agitated for years about migrants “taking all the jobs” switched to worrying about labour shortages – in some cases suggesting quite extreme solutions, such as one particularly maddening Sun editorial suggesting prisoners should be forced to pick fruit, to replace migrant workers who previously did the job.

In recent years, the UK “immigration debate” seems to have been a lesson in how much media can warp public understanding of reality. To build a better, more integrated society we need to find more effective ways to counter the poisonous narratives pushed by certain outlets.

Today’s figures only show how far perception is from the truth.

• Abi Wilkinson is a freelance journalist

• This article was amended on 25 August 2017. It originally stated that in a 2016 Ipsos Mori poll people thought the proportion of immigrants in the UK was 15%. This should have said non-UK EU nationals.

Source : The immigration stats blunder shows how far perception is from the truth | Abi Wilkinson | Opinion | The Guardian